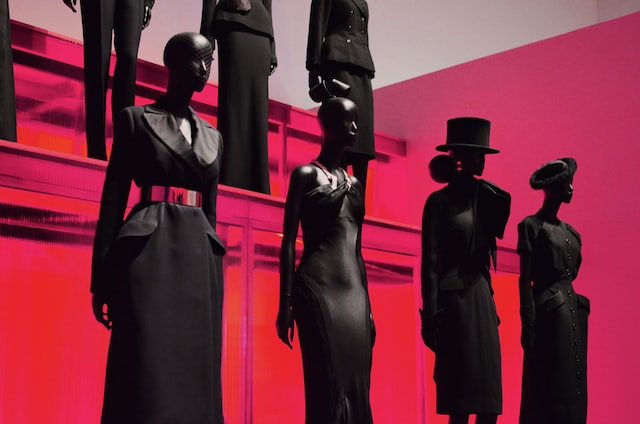 The theatre-thriller “Haute Couture” plunges the spectator into the world of a fashion house. A disconcerting experience to try out.

The immersive play Haute Couture is a tribute to the film noir films of the 1950s and the fashion world of the same period.

The story
Henri Courtois, a young fashion designer, has just inherited a mansion that belonged to his father, François Lartigue, who died in strange circumstances. His last wish was that his home should become the setting for the haute couture house of a son whose existence had been kept from him and whom he had just met two months earlier. The opening of the Courtois house takes place in three days, but the place is occupied by Beatrice Lartigue, Henri’s aunt, who is reluctant to vacate the premises.

1959, a private mansion, eight characters
The first surprise is the location chosen for this immersive play: the Kergorlay-Langsdorff hotel in the 16th arrondissement of Paris – built at the end of the 19th century by the architect Paul-Ernest Sanson for Count Pierre de Kergorlay. From the street, nothing distinguishes this plush hotel with closed shutters from another. It is here, once past the porch, that the eight actors invite the sixty or so spectators to immerse themselves in the atmosphere of the 1950s.

The play starts at the foot of a majestic wooden staircase that everyone is invited to climb to discover the place. The landing on the first floor leads to several rooms (some with closed doors): a large living room – where many scenes take place – adjoins Henri Courtois’ sewing room. He is the main character. His life has been marked by tragedy: the suicide of his mother, the fatal car accident of his great-uncle who raised him, and the death of his father, whom he had just met. He worked in the studio with Suzanne Girard, a former model at Dior.

Next to the large salon, a smaller one where the spectator discovers two comfortably seated actresses who without a word turn the pages of their magazine: Camille Cendre, a model in a booth at Dior, lover of the young couturier, and Lise Fontenoy, an illustrator, who has come to visit the fashion house with her friend Camille.

On the second floor, we discover the large room of Béatrice Lartigue, a fragile woman since the death of her parents in an arson attack and the conviction of her brother. Today, her life is turned upside down by the disappearance of Henri’s father and the arrival of her nephew, who turns her hotel – which she has to leave – into a sewing studio. The viewer discovers her praying beside her bed. A little further on, a small corridor leads to Henri’s room.

A little later we meet Jules Terrenoire, a World War I hero and assassin, who has come after a phone call from Beatrice, but also Jeff Pic, a gangster and Henri’s former childhood friend, as well as Gaston Lacorgne, a commissioner and corrupt cop. The discovery of the murderer of Henri’s father is the main thread of this investigation. But each of them hides a dark secret that the spectator will succeed, or not, in discovering as the scenes unfold.

Chases and intimacy
At first glance, time seems to stand still. The directors let the spectator become familiar with the place. Then, finally, the play begins in the large living room. At the sound of the voices, the spectators, who had been scattered until then, gather there to witness this first scene. The installation of the characters and their characteristics takes time: introducing them beforehand would undoubtedly have facilitated a better understanding of the plot. However, the scenes follow one another rapidly from one room to another, from one floor to another in the 450m2 hotel.

Here the spectator is not passive, but navigates the story by chasing a character to follow the intrigues that are proposed to him. And as the scene is set a few centimetres away from him, he is at the heart of the story. It’s a strange feeling. Immersive theatre is another way of experiencing live performance by giving the spectator the impression of being an actor as well, it is a disconcerting theatrical experience, far from the traditional performance.

The audience is an observer and should not rummage through sets, move objects or open a closed door. If they decide to follow a character into a room but are not quick enough, they risk having the door shut right in front of them and not being able to see the scene. This is frustrating.

During this hour and a half of performance, each person builds their own path through the intertwining plots and each person recomposes the story according to their choices. But what he does not see will not be totally unknown to him: a noise and the summary of what has just happened next door by another protagonist will give him information.

Each scene sheds light on the nature of the characters and helps the viewer to understand who the culprit is. Dangerous situations, countdowns, false leads and love stories are on the menu of this slightly confusing whodunit that revisits traditional theatre. A great experience to try!