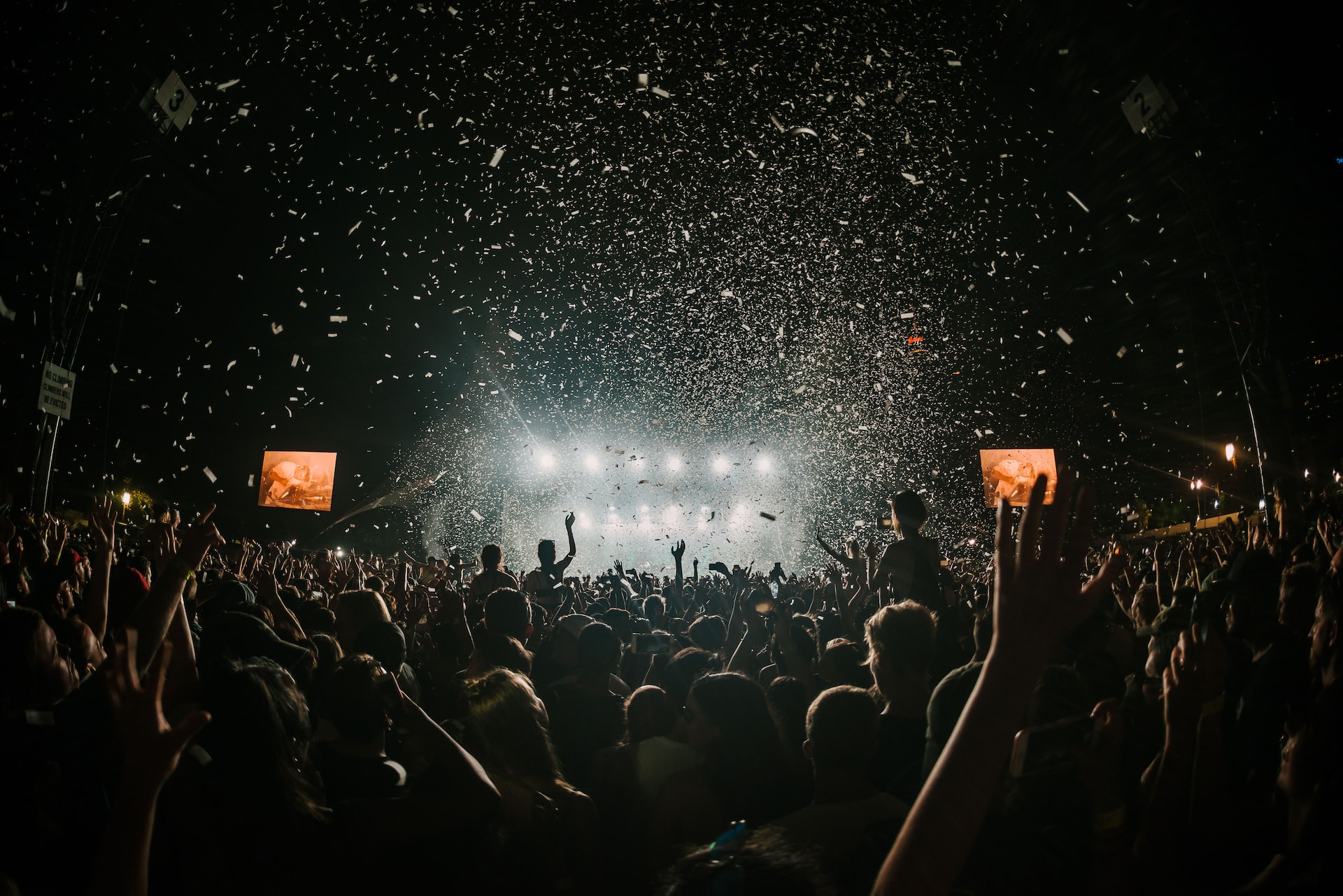 The stage is invisible, a wall of fog lit by strobes. Two figures bounce out of the mist, one wearing a giant yellow wizard’s hat that glows fluorescent in the UV light. So dense is the dry ice, so magenta and lime green the lights, sometimes all you can see is this disembodied hat – which belongs to Dylan Brady, 50% of 100 Gecs – or an arm, sometimes attached to Laura Les, the Gecs’ other 50%.

But the duo make their presence felt. Loud, lurid and packed with nagging hooks, 100 Gecs’ music provides the kind of sensory overload that powers moshpits and burrows deep into the brain with its Dr Seuss rhymes and catchy choruses. It’s fitting that you can only see parts of Brady and Les, because their music is so bitty: a barrage of noises, sugary melodies, short, sharp smash-and-grabs on your attention.

Their uncompromising aesthetic throws down a dividing line. Its bratty ridiculousness can sound like the end of days, like Crazy Frog on steroids – or like unabashed fun, a gleeful reductio ad absurdum of synthetic pop, trap and nasal singalong US punk. Brady and Les then apply the faster-harder production values of nerdy subgenres such as chiptune (the tinny music of video games) and nightcore (speeded-up versions of Euro dance tracks).

Hey Big Man, their set opener, is a minimalist banger, all fat beats and one seductive hook; half-singing, half-rapping, Brady and Les take turns to diss a corpse. Stupid Horse follows, a high-fructose punk-pop tune about losing money on the races. Her voice layered in Auto-Tune, Les bemoans her empty bank account, then kidnaps the horse.

Turning Auto-Tune up to 11 is not new – Cher and rappers have been at it for years – but 100 Gecs keep it on between songs, so that even Les’s onstage chat is often delivered as robot melisma. As well as pulling up the artificiality of the technology – the digital equivalent of sucking on a helium balloon – 100 Gecs’ use of voice distortion has an added dimension: Les, who is a trans woman, uses voice modulation to achieve a desired timbre . With Brady often doing the same, notions of gender go out the window.

Friendly and affable, hellbent on having the kind of fun that is both in-jokey and inclusive, 100 Gecs have songs about bad smells and snack food , about losing teeth and smashing your hand with a mallet – a song that Les, having fallen over, manages to weave skilfully into a discussion about workplace injuries. Money is a recurrent theme, as are insults.

Most often, 100 Gecs’ threats are very funny. “You talk a lot of big game for someone with such a small truck,” is one particularly withering put-down from one of their best songs, Money Machine. Both Brady and Les hail originally from outside St Louis, Missouri; they bring to their adopted LA a lifetime of midwestern basement-dwelling, of creasing up while high, and revenge-of-the-nerds wish fulfilment.

Their music has the air of an elaborate art prank: it isn’t. Perceived as irritants, Brady and Les are actually alchemists, trying to distil down what exactly makes a banger bang, how little – or how much – of it you can use to provoke people to go nuts, what percentage of air you can add to a vocal before it becomes a keyboard line. In this they make common cause with fellow travellers in hyperpop: people such as Charli XCX , the UK’s PC Music crew and the late Sophie , whose pioneering Product compilation album of 2015 remains a high-water mark of the minimalist end of the genre. Drawing from the extremes of K-pop and J-pop, hyperpop finally hit what traditionalists might understand as the big time this year, when PC Music innovator AG Cook produced a track on Beyoncé’s Renaissance album, All Up in Your Mind .

But 100 Gecs have long been having their own moment. Their 2019 debut album, 1000 Gecs, unexpectedly found critical acclaim and a wide audience far beyond Reddit chatrooms. Its 2020 remix companion, 1000 Gecs and the Tree of Clues, featured Charli XCX, emo legends Fall Out Boy and rapper Rico Nasty. They signed to a major label, Atlantic Records, and their highly anticipated second album, 10000 Gecs, is having the kind of long gestation that suggests that moving the decimal and topping 1000 Gecs might be causing the fun-loving duo no little angst. One of their newer songs, Hollywood Baby, bemoans how weird and expensive LA is, while exposing what might be some deep-held insecurities. “You’ll never make it in Hollywood, baby,” sings Les mournfully.

As much as 100 Gecs seem to play on surfaces, it’s their depths that promise staying power. The bleepy, yearning Ringtone finds Les only answering her phone to one boy; the ska-punk workout Fallen 4 Ü tells of a crush born in the moshpit.

Most lethal of all is the mighty Mememe , a tune about mutual incomprehension with a devastating kiss-off. “Now you’ll never really know, know-know-know, know-know-know/ Anything about me, me-me-me, me-me-me,” the pair chant. For all the irreverence of 100 Gecs’ art, the urinal it presents to the academy , their love songs are romantic and sincere, and their breakup anthems heartfelt and skewering. In other words: proper pop music.