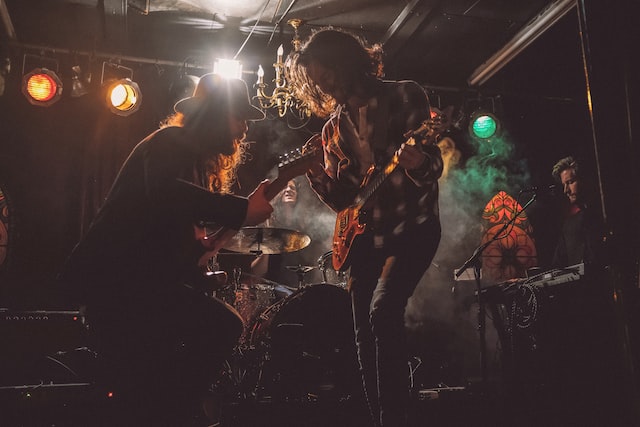 After a five year wait, the Canadian indie-rock band have returned with Blue Rev, one of the best records of the year. Their lead singer and guitarist reflects on perfectionism, Morrissey fandom and creating a sound that’s ‘strange and familiar’

It may be clouded in haze and rippled with waves of distortion, but there’s a steely perfectionism to Alvvays’ music. The Canadian quintet’s driving indie-rock tracks are constructed around euphoric key changes, surprising codas and heartbreaking grace notes; although lead singer and guitarist Molly Rankin says the five-year gap between 2017’s Antisocialites and this year’s Blue Rev “wasn’t supposed to be this long”, you can’t help but listen to the album and hear an impulse to make every guitar solo fizz, to imbue each song with a jolting sense of surprise. And, of course, when Rankin is asked whether she’s a perfectionist, she provides the quintessential perfectionist’s answer: “I mean, I wouldn’t use the word perfect.”

In truth, Rankin and her bandmates – guitarist Alec O’Hanley and keys player Kerri MacLellan, who both wrote the album with Rankin, along with bassist Abbey Blackwell and drummer Sheridan Riley – make music with a brutally exacting eye. They aren’t personalities, and they clearly aren’t driven by any desire for festival main-stage success. Instead, they’re trying, perhaps monomaniacally, to capture the jouissance, if not the exact sound, of classic 80s and 90s indie bands such as Dolly Mixture, the Smiths and Teenage Fanclub . “There is a world that we insist on inhabiting, and to get into that world it takes a lot of time,” says Rankin, Zooming from the Toronto apartment that all five band members are currently living in ahead of a world tour. “It takes a lot of work to make things sound rough, and pretty, and strange and familiar.”

By those markers, Blue Rev, named for the sugary, caffeinated alcopop Rankin and MacLellan would drink as teens growing up on Nova Scotia’s Cape Breton Island, finds Alvvays deep in the pocket. It has a brilliantly contradictory spirit: it is a literary shredder, a white-knuckled daydream, a mild-mannered barnstormer whose songs deftly tease out complex emotional threads from the smallest details. Rankin’s lyrics, fixated as ever on life’s moments of inertia and grand upheaval, are sharper than ever: sensitive but exacting, they can be vividly poignant (“I saw your sister at the pharmacy, picking up / Said you had that new love glow”) or devastatingly funny (“Is she a perfect 10? Have you found Christ again?”) but always capture quotidian moments with a warm, wry lens. If this record feels like it lets Alvvays’ eccentricities run wild it’s because, Rankin says, between records she’s stopped “caring as much about what people think”: “Maybe I’ve gotten a little bit weirder as time has gone on.”

The “familiar” part of Alvvays’ music has meant that they’ve always felt like a band in direct conversation with their influences: Teenage Fanclub’s Norman Blake played on Antisocialites, and its track Lollipop (Ode to Jim) was named in tribute to the Jesus and Mary Chain’s Jim Reid. Here, those references become even more explicit – one song is named after Television’s Tom Verlaine, while Belinda Says references Belinda Carlisle’s Heaven Is a Place on Earth, the lyric “Belinda says heaven is a place on earth / Well so is hell” signalling the song’s hairpin turn towards a battering finale. Pressed, the result of Rankin trying to “unleash my inner Morrissey”, is a superlative, and fittingly romantic-slash-misanthropic, Smiths tribute.

That sense of fandom, says Rankin, is a vestige of the band’s early days, when they were living on Prince Edward Island trying to work out how to transfer the alchemy of the songs they loved into their own music. “Sometimes there’s a disconnect between the music you love and the music that you make, so it was a goal to try to channel those things – and, inevitably, I think it does end up just sounding like our band. As much as I want to sound like Teenage Fanclub, that’s never going to happen.”

There can be a thorniness to fandom that becomes more apparent with each passing year – the idea that idolatry may not be as simple as it was in one’s youth. In almost every interview that Rankin is asked about her influences, she brings up the Smiths – so I ask, Smiths fan to Smiths fan, how she’s coped with the last few years, which have seen Morrissey show support for far-right political parties and spew racist sentiment at his shows and in the press.

“Because I love the idea of two people with great ideas colliding at a very specific time and making something really beautiful and timeless, I feel very invested in the Smiths – so you might have to pry that from my cold dead hands,” she says. “It doesn’t mean that I agree with the views of Morrissey and where he’s gone with all that – you know, justice for Johnny Marr.”

As with so many other records, Blue Rev’s creation was greatly affected by the pandemic – although the band began writing songs soon after releasing Antisocialites, Covid border closures meant that Rankin, O’Hanley and MacLellan couldn’t meet up with the US-based Blackwell and Riley in person. But global events aside, the band’s process still sounds, at least to a degree, gruelling: “I’m pretty picky about the arc of a song and not afraid to abandon things to the cutting room floor,” says Rankin. In the studio, she and O’Hanley will record minor variations on guitar or vocal lines (“He could be in an isolation booth and I’m yelling out notes to him to play variations of his riffs … or I’m in the booth and he’s telling me alternate lyrics”) and Rankin says she’s always trying to “hunt down” emotional depth in her songs through the use of dropouts or key changes or any other number of musical devices.

There seems to be something militant, almost Andersson and Ulvaeus-ish, about the way Rankin and O’Hanley approach Alvvays. What the band forgo in flashiness they make up for in quality control; they like to take their time to make things perfect, a rare luxury in a world where indie bands often have to pump out records in order to be able to tour – the only place any band can realistically hope to make a living.

“I do think that we probably drive people crazy, Alec and I, with the things that we want – if I want something to look a certain way and you’re not willing to do it, I’ll learn how to do it myself.” says Rankin. That bullish commitment to the band’s shared vision, though, has resulted in one of the year’s best rock records; the five-year wait may have been protracted by Covid, but it wasn’t unnecessary. “I’m really stubborn,” says Rankin. “If someone is grilling me about when things are going to be finished, I dig my heels in – and say ‘Whenever I want it to be finished’.”